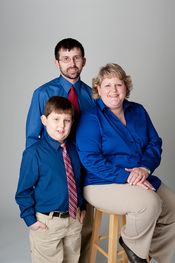 Our family has a long history in funeral service.  Roy E. Gaunce, Jr. began his career 50 years ago at the former Davis Funeral Home in Paris.  He graduated from the Kentucky School of Mortuary Science in 1964 and received his funeral director’s and embalmer’s licenses in 1965.  After working in funeral homes in Mt. Sterling, Owingsville and Salt Lick, the opportunity to return to his hometown of Carlisle arose.  On January 1, 1979 he and his wife, Brenda, became part owners of the Mathers-Shearer Funeral Home, then changing the name to Mathers-Gaunce Funeral Home.  He remained a partner in the firm until his untimely death in 2009.

A lasting legacy was created when their son, Brent, joined the firm upon his graduation from Nicholas County High School in 1990.  Brent started his funeral education at Mid-America College of Funeral Service in September, 1992. While at Mid-America, he had the unique opportunity to serve an internship with Pearson’s Funeral Home, Louisville’s oldest and most prestigious funeral home. Upon his graduation in 1993, he returned home to Carlisle and received both of his licenses. At the retirement of Taylor Mathers in 1998, Brent and his wife, Emily, became part owners with Roy and Brenda. Brent has served the community in various civic organizations, as past president of the Nicholas Co. Lions Club and the Nicholas County Chamber of Commerce as well as a longtime member of the KY Army National Guard, Carlisle Unit. Within his profession, he has served as president of the Central KY Funeral Limousine Association and currently serves on committees within the Funeral Directors Association of KY. His technical skills and experience are recognized by many area funeral homes and allows him to be one of only a select few members of the American Society of Embalmers in the state of Kentucky.

In continuing with tradition, Emily graduated with an Advanced Diploma in Mortuary Science the Des Moines Area Community College and became a dual licensee in 2010. In addition to her training and experience in funeral service, she has been a licensed pre-need insurance agent since 1997.  Emily has served the community in various capacities for many years, with the Carlisle Community Womans Club, school and scout groups. She also currently sits on the Board of Directors of the Central Kentucky Funeral Limousine Association and acts as their Secretary-Treasurer.  Emily is proud graduate of Transylvania University, where she is active in several alumni groups.  Brent and Emily’s  proudest accomplishment is their son, William Michael, age 16.

Mathers-Gaunce Funeral Home is proud to be the community’s only full service funeral facility.  The Gaunce family’s experience and dedication to those we serve, ensures that all who are entrusted to us remain under our direct care at all times.  We feel that there is no greater honor than serving a family in their time of need.  We are your friends and neighbors who are here to answer your questions, guide you through uncertain times, and offer services that will exceed the standards that people have come to expect at Mathers-Gaunce.

Why Choose Us?
About Us
Our Staff
Our Facilities
Testimonials
Contact Us